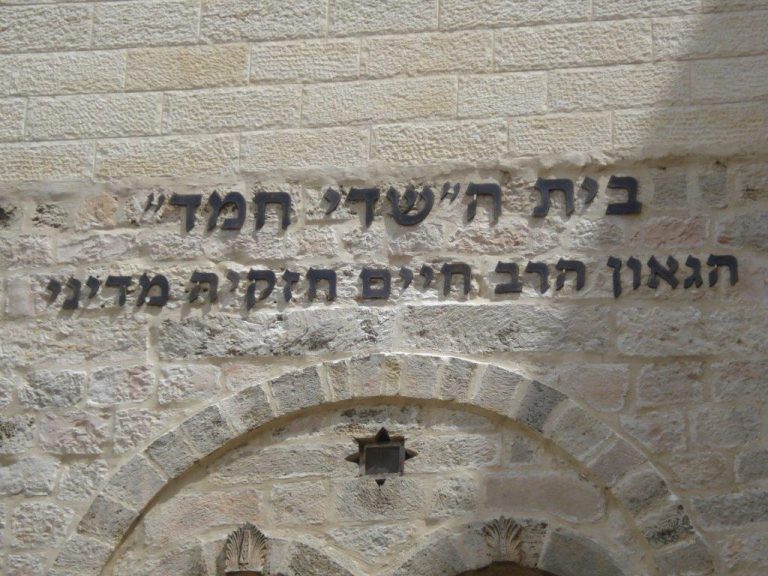 The Romano Estate is a large Jewish site dating back to the 19th century.  It is situated outside of the Kasba (market) in Hevron.  There are two main buildings on the site:  Romano House and the Sdei Hemed House.  The original Romano House building consisted of three large floors (about 600 meters each).  The site also had wells and outhouses.  The building was constructed by Haim Yisrael (Merkado) Romano, a wealthy merchant from Kushta (Istanbul), on a large plot of land that he purchased.

The Sdei Hemed House was built adjacent to Romano House with a shared wall.  The Sdei Hemed, Rav Haim Hezkiya Medini, ztzl, was the rabbi of Hevron and was known as the Sdei Hemed due to the halachic encyclopedia he wrote of that name.

According to the inscription above the entrance to the Romano Estate, the building was erected in 1875-1876.

The date of construction of the Sdei Hemed House is not known. However, it is certain that it was built after Romano House was completed and before the year 1901, the year in which Rav Hezkiyah Medini, ztzl, moved in.

Yeshiva Shavei Hevron  that maintains The Romano Estate and the Hevron Municiaplity, preserve and reconstruct parts of the site.

Romano House Throughout The Years

When it was dedicated in 1976, the Romano House served as the residence for the Romano Family and other Turkish families (principally elderly who came to live out the last years of their lives in the Holy Land, near the burial site of Our Forefathers).  The building also served as a center for guests.  It contained a beautiful synagogue known as The Istanbuli Synagogue, used by the small Turkish community living in Hevron.

In 1901, about one year after Rav Haim Hezkiyah Medini came to Hevron, he was invited by the Romano Family to live on the Romano Estate in a two-story house known as The Sdei Hemed House.   He lived on the second story of the house and shortly after moving in, established his yeshiva, Yeshivat Sdei Hemed, at the Romano House in a room adjacent to his home.  The first floor housed The Sde Hemed Library, which contained of more than 10,000 volumes, some of them rare.

The Sdei Hemed passed away in his home in 1905.

In 1912, Haim Yisrael (Merkado) Romano requested of his son, Avraham Romano, to sell the buildings.  There was concern that Romano House and the Sdei Hemed House would be transferred to Arab hands.  Under the initiative of Rav Shimon Hausman, the site was sold to Chabad.  Almost of all of the previous residents were required to leave.  The Istanbuli Synagogue remained. The large Torath Emeth Yeshiva was established on the third floor (the entrance floor).  This Yeshiva was the first of its kind in Israel as it contained housing for its students.  The Chabad Institutions and the yeshiva they established did not remain at Romano House for long.  As they were supporters of Russia, an enemy to the Turkish government during the First World War, they were expelled from The Romano Estate in 1914.

In 1917, the British took control of Romano House upon their entrance to Hevron.  Despite the opposition of Chabad, who were paid rent, the grounds were turned into the British Headquarters and prison.  The entrance floor contained the courthouse, the lower floor became police headquarters and the basement floor held the prison.

In 1929, the British brought all of the survivors of the Arab riots to Romano House.  From there, they were relocated to Jerusalem.  Only one Jew, who worked as a policeman in the British police headquarters at Romano House, remained in Hevron.

After the Jordanian occupation in 1948, Romano House was transformed into a school for Arab girls that continued to be active until the liberation of Hevron in 1967.  After the Six-Day War, the building contained only two floors.

After the murder of six Jews near Beit Haddassah at the hands of Arab terrorists in 1981, the government of Israel returned the building to Jewish hands.  Several Jewish families resided there.

Yeshiva Shavei Hevron, under the guidance of Rav Moshe Bleicher (today the Acting Rosh Yeshiva is Rav Hananel Etrog) had its beginnings at Beit Haddassah.  It 1982, it was transferred to the Romano House, its permanent home until today.

During the years 1996-2000, when the building was being remodeled, the basement floor was found covered over with earth.  It was renovated and another two stories were added to the structure.

Most of the area that was originally purchased by Haim Yisrael Romano is in the hands of the Yeshiva today.  The southern portion of the original site, is presently used by the Israeli army as the central base in Hevron.  Several families live in caravans on the base.  Additionally, on the northern side of the site there are abandoned shops that were built by the Arabs in 1933.

Rav Haim Hezkiyah Medini, ztzl, was known as the Sdei Hemed.  He was born in Jerusalem and was the son of Rav Eliahu Rafael Medini, a family that had been residing in Jerusalem for generations.  He was granted a teaching certificate at the age of 13!  Due to economic difficulties, he left for Kushta (Istanbul) and was appointed as a Dayan.  In the year 1866, he was asked to become the Head Rabbi of the city Kraso-Bazar in Karim, Russia.  This city had a Jewish community that resided there for years and spoke the Tartar language.  The Sdei Hemed became well-known in the area and was greatly admired even by members of the local Christian and Muslim population.  During his time in this city, he began to write his encyclopedia, which he named, Sdei Hemed.   During this period of his life, he also became ill with a fatal disease, at which point, he added the name Haim.

His name became known outside of the city he lived in and many turned to him with questions from far.  He bore witness to this:  Many are my troubles from over my head to toes as many come from all corners of the world, as well as from nearby.  This one cries and that one cries from many different problems.

The Sdei Hemed returned to Israel on the tenth of Tamuz in the year 1899, after 33 years of serving the Jewish community in Karim.  For the first two years, he resided in Jerusalem.  Then, he was appointed to be the Head Rabbi of Hevron and served in that position until his death.  In Hevron, he opened a yeshiva at Romano House, where he also completed his halachic encyclopedia, Sdei Hemed.

Rav Medini wanted to see the Jewish community in Israel expand and called to others to come and take part in the holy mission of settling Eretz Yisrael.  He emphasized that those who did so would be happy all of their days and afterwards as they would be worthy of witnessing the true Geula.

Rav Medini gained respect among the Arab population, who viewed him as a man-of-G-d.  He had an impressive appearance. Many bore witness to the length of his beard, claimed to have reached his knees.  When he was buried in the old Jewish cemetery in Hevron, many Arabs respectfully participated in order to honor him.  The night after his burial, some Arabs stole into the cemetery and began to uncover his grave in order to move him to the Muslim burial site.  The act was discovered and the Jewish community called upon the police to guard over the grave site for a very long time.  Rav Medinis detailed will was printed at the opening of the fourteenth volume of the Sdei Hemed.

Or Li – Responsa (published in Izmir in 1871) in memory of his only son, who died during his lifetime.  The book was published anonymously.

Sdei Hemed – An eighteen volume comprehensive work containing laws and chidushim, arranged in alphabetical order.  The Sdei Hemed is one of the most popular works in Torah Literature, despite its many volumes.  It was published in many editiions.  The Sdei Hemed is an encyclopedia that provides central halachic questions and answers that pertain to daily life and addresses matters that were of concern when the book was written. The work integrates the halachic approaches and answers of both Ashkenazic and Sephardic rabbis in alphabetical order.  No previous work presented halachic matters in such a comprehensive way.  Except for the book, Pachad Yitzhak that was written about 300 years prior to the publication of the Sdei Hemed, the book is a pioneer in Jewish encyclopedias.

Pequot Sadeh – (published in Jerusalem in 1900) – an addition to the Sdei Hemed.

Historical Landmarks in the History of the Romano Estate

1875 – Dedication of The Romano House, which was then the residence to Jewish families from Turkey and contained a hostel and The Istanbuli Synagogue.

1908 – The year in which, the process of the acquisition of the Romano Estate by Chabad began.

1912 – The year in which the acquisition of The Romano Estate by Chabad was completed and the Chabad Yeshiva, Torath Emeth, was established.

1914 – Romano Estate is confiscated by the Turkish government and Chabad is expelled from the site.

1917 – The British take over The Romano Estate and establish their headquarters and prison on its premises.

1929 – The Jewish survivors of the Arab Riots are expelled from Hevron.

1982 – Yeshiva Shavei Hevron is established at the Romano Estate.