The Cave of the Machpela

The Cave of the Machpela 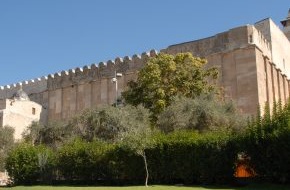 The Cave of the Machpela, situated in the heart of Hevron, represents the first acquisition of land in Eretz Yisrael.  It was purchased by Avraham Avinu from Efron the Hittite, about 3700 years ago.

According to the Midrash, the sweet smell of The Garden of Eden that rose from the Cave of the Machpela, is what caused Avraham Avinu to decide that it should be the burial place of his wife Sarah.

There are four couples buried at the site:  Adam and Chava (according to the Midrash), Avraham and Sarah, Yitzhak and Rivka and Yakov and Leah.  The name of the site Mearat HaMachpela in Hebrew arose due to this fact.  The root of the word Machpela stems from the Hebrew word, double.  This name was given due to the couples buried there as well as the fact that the structure contained a cave within a cave.

When the spies came to Eretz Yisrael, Calev Ben Yefuneh came to Hevron in order to pray at the gravesites of Our Forefathers as he disagreed with the outlook of the others.

The structure that was erected above the Cave of the Machpela is one of the nicest monuments that remains in its original glory from the period of the second Beit Mikdash.   There are those who claim that the building was constructed by Herod as the style is similar to others he built.  However, others claim that the building already stood before Herod and that it was actually built by one of the Hasmonian kings.  The structure is like a perfect, but smaller, model of the Temple Mount.  Its measures about 35 meters by 60 meters. The height of the southern wall is about 20 meters and the walls are nearly 3 feet thick.  On the northeastern wall, there is a stone the length of about 7.5 meters that weighs 40 tons.

The stucture stands in excellent form since its construction 2000 years ago and has been in use for the whole time period.  Since the destruction of the Second Beit Mikdash, it has fallen under the control of various rulers.  It was under the control of the Christian Byzantines, then the Arabs (Muslims), the Crusaders (Christians) and the Mamelukes (Muslims).  In the 7th century, during the time of the Byzantines, there was an earthquake that destroyed entire cities throughout Israel.  As a result, some stones were dislodged from the southern part of the structure of the Cave of the Machpela.

Throughout the generations, despite great tribulations, Jews (including great leaders), came from all corners of the world in order to pray at the Cave of the Machpela.

The Mamelukes did not allow Jews to pray at the Cave of the Machpela.  They did not allow them to come closer than the seventh step leading up to the entrance from the year 1267.  For this entire period, until the liberation of Hevron during The Six-Day War, Jews were not allowed to establish a synagogue on the site.  In 1967, when Hevron was liberated by the Israeli army, the inhabitants of the city surrendered without a fight.  This could have been due to the fear that the Jews would retaliate against the Arab uprisings of the past.

The historical-archaeological significance of the structure of the Cave of the Machpela surpasses its majestic appearance.  The proof of this lies in the many long years that Jews have come to pray at the burial site of Our Forefathers. The glory of the site cannot be expressed in words.

The actual knowledge regarding the cave itself is sparse.  It is known that there are two marble columns that stand parallel to one another in the Hall of Yitzhak and that they both are connected to an underground hall where there is another cave.

Over the last generation, the mysterious screen concerning the cave was somewhat lifted and some facts were uncovered about the underground cave.  After The Six-Day War, a slender 12 year- old girl, by the name of Michal Arbel, was lowered on a rope through an opening in the Yitzhak Hall that was 26 centimeters in diameter.  The child discovered an underground room with three gravestones.  A hall, about 16 meters long extended from the room and led to an exit that had been closed off.

About thirty years ago, during the month of Elul, when the Selichot Prayers were being recited at the Cave of the Machpela, some guides from Midreshet Hevron made enough noise to alarm the Muslims who were in charge of guarding the site.  The noise that the Jews managed to make through blowing the shofar made it possible for several guides to open the closed opening leading to the underground cave.  When they entered it, they discovered a double cave that had very strong winds.  The cave can be found underneath the stone that marks the burial place of Avraham Avinu in the Cave of the Machpela.  The underground caves are filled with dirt, almost to their full height, and the remnants from the time of Our Forefathers are buried deep below. However, on top of the earth, with which the underground cave was filled, broken bones and ceramic remnants from the time of the kings of Yehuda (about 2900 years ago), were found.  According to some opinions, Cohanim are prohibited from entering the building of the Cave of the Machpela because numerous Jews were buried at the site over the years.